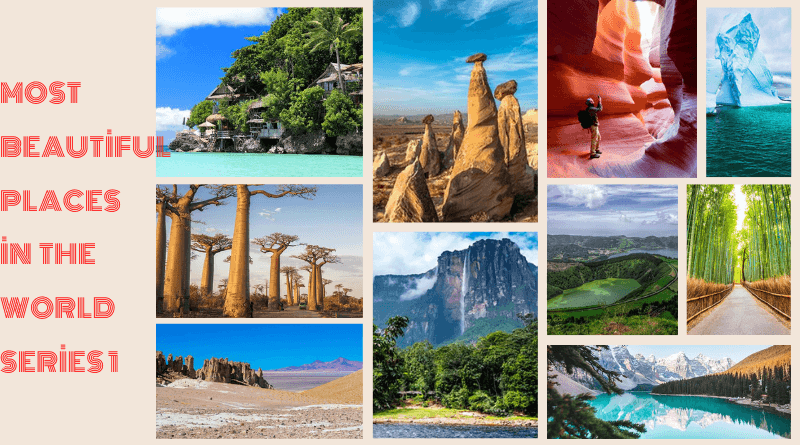 10 Most Beautiful Places in the World

Giant glaciers, interesting mountains and plains full of wild animals… We certainly live in a big and wonderful world. In fact, it may seem impossible to decide where to go next while looking at the most beautiful places in the world. The world-famous travel magazine Conde Nast Traveler has listed the 51 most beautiful places in the world that you must see, from Antarctica to Arctic glaciers, from east to west. The list includes two natural wonders that must be seen from Turkey as well.

The world is full of magnificent beauties. Although we have been deprived of these beauties due to the pandemic process we have been in for a while, people are waiting to discover these unique routes again in the future. The world-famous travel magazine Conde Nast Traveler has published a list of these beauties.

There are two magnificent places from Turkey in the list, which is full of vast deserts, unbelievably beautiful coves, jungles, vast mountains and exceptionally beautiful waterfalls. Here is the first series of 51 of the world’s most beautiful places that you must see in the future, from Oceania to Africa, from America to Europe, 10 Most Beautiful Places in the World.

Venezuela is home to Angel Falls, the highest waterfall in the world. The 3,212-meter Angel Falls waterfalls in the UNESCO-protected Canaima National Park. It is the most popular attraction in the country. Flowing 19 times higher than Niagara Falls, this huge natural wonder is one of the must-see places.

Even though 99 percent of Antarctica is covered in ice, the landscape still manages to be surprisingly diverse. Surreal blue glaciers manage to amaze those who see active volcanoes. Drake Pass’s rough waterways and 360-degree views of pristine snow are the details that make this uninhabited continent spectacular.

Every traveler should experience the endless heights of this bamboo grove on the outskirts of Japan’s historic capital, Kyoto. The experience actually extends beyond the visual world: In 1996, Japan’s Ministry of the Environment included the Arashiyama Bamboo Grove in its list of Japan’s 100 best Soundscapes. The sounds that will be heard while walking here have an extraordinary beauty. However, it has been observed that these sounds cause different reactions in some people. So much so that even the existence of those whose mental health is impaired due to the sounds in the forest has been recorded.

Antelope Canyon is a natural wonder canyon in the southwestern United States. Navajo means “where water flows through rocks” and is a reference to the formation of the canyon through erosion. Narrow, undulating spaces between rock formations create vibrant patterns when sunlight filters through the striped stone. This aspect makes Antelope Canyon one of the 51 most beautiful places in the world.

The Atacama Desert is a world-famous desert of Chile, with the Pacific Ocean to its west. This desert, where almost no rain falls, is also known by NASA as the place where spacecraft are tested. Until the rain in 1971, no precipitation was recorded in the region for 400 years. Today, Atacama remains the driest place in the world.

Madagascar, one of the largest islands in Africa and the world, is home to a great wealth of nature as well as its natural life. The island’s beauties include giant moths, bug-eyed lemurs, and places like the surreal Baobab Avenue, where centuries-old trees reach almost 75 meters high.

The Azores archipelago, located in the Atlantic Ocean, remained for a long time the most extreme point reached by Europeans in the West until America was discovered. Azores, which is a real natural wonder, is also quite developed in terms of tourism today. The Azores, a group of islands connected to Portugal in the Atlantic Ocean, is also the last place where the sun sets in Europe.

Canada, the second country with the largest surface area in the world, is also home to many natural beauties. Banff National Park, located in the province of Alberta in the western part of Canada, which is one of the most favorite routes for nature lovers with its vast forests, mountains and glaciers, is one of the country’s most important natural riches.

With its magnificent coastlines and romantic sunsets, it’s easy to understand why Boracay has been chosen by people as one of the best islands in the world. Unfortunately, this natural wonder place has become overcrowded lately. This brought environmental problems with it. To make up for the negativity, Boracay was closed for “rehabilitation” a few years ago. Now it is open to a limited number of visitors only.

Cappadocia, a region where all the cities in Turkey are carved into the rocks, is an incredible natural phenomenon in itself. But whenever hot air balloons fill the sky, most of them take off at sunrise, the level of beauty literally reaches its peak. Cappadocia, which means the Land of Beautiful Horses, arouses admiration with its fairy chimneys as well as its underground cities, and as such it manages to be one of the 51 most beautiful places in the world.